Prevost Car is a Canadian Coach, Bus and Motorhome producer owned by The Volvo Group.  Prevost currently focuses on passenger coaches along with bus shells used as conversions for motorhomes or private coaches but in the past has also made several pre-fabbed motorhomes.

When you visit PrevostCar.com you will also see resources for Parts, Service, Merchandise, along with spotlights on various specialty RVs such as the entertainer made for traveling musicians and the Volvo 9700.

Prevost products are for a wide variety of customers including public transit, commercial transportation providers, tour bus companies, traveling musicians, entertainment companies along with the specialist and common RV enthusiast. 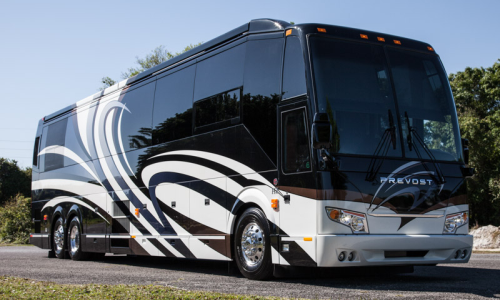 Prevost was originally formed when cabinet marker Eugène Prévost was asked to build a custom bus body.  After this initial request demand grew and eventually a plant was built to begin full time production.  The company was aquired in 1957 and again in 1969 before being sold to Volvo Bus Corporation in 1995.

Prevost is also well known for producing Ground Force One, which is the name of the X3-45 shells used by US Presidents including both George W Bush and Barack Obama.

Having anything else to add?  Let us know in the comments section below.

Rather you are a buyer or seller and have found this site useful to you, please consider donating to help us provide a better user experience.